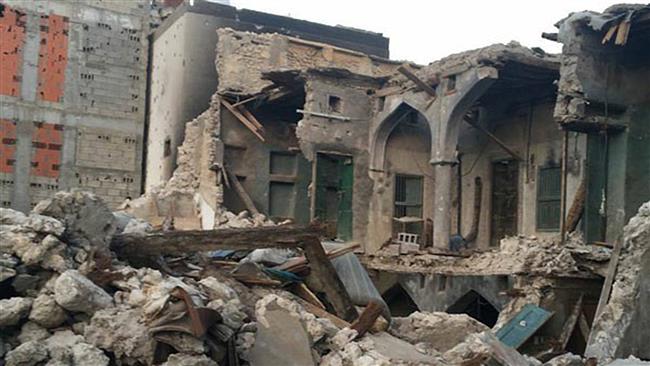 In an interview with Shia Followers, former U.S. Army officer Joachim Hagopian said, “For many decades the Shia residents in the Saudi Kingdom have been discriminated against, with the 30,000 residents in Awamiyah never receiving the benefits of modern infrastructure, technological development and economic aid allocated to the rest of Saudi Arabia.”

“Encouraged by the militaristic Zionist policies of Donald Trump now surrounded by neocons and generals, the corrupt Riyadh government seized opportunity to begin an unprecedented policy of purging its Shia citizens, deploying the same oppressively brutal methods of violence that the Israeli security forces have historically been using against innocent Palestinians (with full U.S. support) in its genocidal agenda to exterminate its Muslim population.” He added.

What goals is the Saudi Kingdom pursuing by targeting the country’s Shia minority in Awamiyah?

Joachim Hagopian: In large part British imperialism promoted Wahhabi extremism in Saudi Arabia, backing the bloodthirsty tyrant Abdul Aziz Ibn Saud using its divide and conquer agenda to control the Arab world immediately following World War II, carving up the defeated Turkish Caliphate that was once the powerful, then demolished Ottoman Empire. Installing the House of Saud as its colonial puppet to rule over Saudi Arabia strategically including the sacred Islamic sites of Mecca and Medina in the same way that the Balfour Declaration spawned the formation of the Jewish State of Israel to rule over sacred Palestine, backing these designated Western allies ensured that Islam in the Middle East would forever remain violently divided in hopeless disunity. Essentially World War II transferred the imperialistic baton from British Empire rule to American Empire’s global military dominance, ensuring the West’s continued exploitation of the Middle East for its oil while favoring the Anglo-American-Zionist wedge that to this very day keeps Islamic world divided and at war with each other. By nefarious design, this U.S. allied proxy assault exercising control over the region has led to nonstop Middle Eastern wars, propagated by the bogus “war on terror” and engineered the religious sectarian divide amongst Muslims, exploiting and promoting continued hostilities and conflicts between the Western backed Saudi Sunnis and the Eastern supported Iran Shiites. The U.S. backed Saudi genocidal war in Yemen is but one example. The malevolent militaristic interests of unbridled U.S.-Israeli Zionism merged with U.S. Empire’s unipolar hegemony has set the current stage to ignite the larger world war in the Middle East between the aggressive neocon controlled West pitted against the forces of the East regionally represented by Iran and its formidable chief allies Russia and China.

This is the historical backdrop that has led to today’s precarious Middle Eastern powder keg, and largely explains why the Western backed oppressive Saud regime is blatantly engaging in ethnic and religious cleansing of the Shia minority living in the kingdom’s eastern province of Qatif. Last May’s Saudi government siege and brutal destruction of the 400 year old city of Awamiyah was strategically timed with President Trump’s first visit to a foreign nation, arriving in Riyadh to secure the largest weapons deal in human history. The House of Saud dictatorship took full advantage declaring war on the 15% Saudi population that are Shiites. This overt aggression was preceded in January last year by Trump becoming president timed with the execution of Shia religious leader Sheikh Nimr Baqir al-Nimr for his peaceful resistance advocating human rights. Genocidal apartheid regimes like Saudi Arabia and Israel began boldly stepping up aggression against their targeted sworn enemies in anticipation that Zionist Trump would tacitly approve in complicit support.

For many decades the Shia residents in the Saudi Kingdom have been discriminated against, with the 30,000 residents in Awamiyah never receiving the benefits of modern infrastructure, technological development and economic aid allocated to the rest of Saudi Arabia. Encouraged by the militaristic Zionist policies of Donald Trump now surrounded by neocons and generals, the corrupt Riyadh government seized opportunity to begin an unprecedented policy of purging its Shia citizens, deploying the same oppressively brutal methods of violence that the Israeli security forces have historically been using against innocent Palestinians (with full U.S. support) in its genocidal agenda to exterminate its Muslim population. The parallels between Israeli genocide against Palestinians and Saudi genocide against its Shia citizens is most transparently obvious and very striking.

And with virtual Western media blackout and silence never reporting the overt bloody aggression murdering dozens of Shia residents in Awamiyah over this last year, the despotic kingdom has only been emboldened to ratchet up its appalling savagery against its own citizens. Without the West in any way opposing the murderous policy exterminating Shias using American and Canadian made weapons, just as in Yemen, Riyadh is confident in the West’s support to continue inhumanely defying all international laws while killing its own citizens. Just like the U.S.-Israel-EU coalition always justifies its rampant senseless killing of innocent civilians around the globe using its false pretense of war on terror, so is the Saudi government bogusly claiming that its military offensive in Awamiyah is intended to root out Shia terrorists backed allegedly by enemy Iran despite lack of evidence. It’s always the same old, worn out, propagandized excuse used to unjustifiably demonize invented enemies in order to wage its war on humanity. Silence is the word when terrorism is committed by U.S. and its allies while their enemies are always falsely accused of terrorism. It’s an atrocious old pattern regularly deployed by the deceitful West.

Followers of the Wahhabite mission believe that “Muslims who seek intercession from holy men, such as the imams revered by Shias, are not ‘true’ Muslims.” How relevant is this belief to the living conditions of Shia Muslims in the region?

Joachim Hagopian: The Wahhabis’ extremist belief that their brand of Islamic religion is the only one that is correct and favored by Muhammad and Allah again supplies the false pretext to kill other Muslims claiming the wrong brand. Vilifying the designated enemy as non-believers of the true religion is always the convenient excuse to justify a policy of discrimination, persecution, violence and war. Unfortunately the Wahhabis aren’t alone in their warped black and white extremism that preaches hatred of all proclaimed infidels. That’s why the Saudi cities and towns where the Shia population is the majority have been severely oppressed and neglected where Shia citizens have never been allowed fair representation in either local or provincial government. Historically the “God’s on our side” rationale always offers justification for the most heinous wrongdoing. Riyadh’s longtime blatant policies of discrimination and injustice went largely unchallenged until 2011’s so called Arab spring uprising. A small band of Shia residents began protests asserting their long denied democratic and human rights. The dissent movement remained peaceful until last May when sudden eviction orders were announced and bulldozers accompanied by Saudi security forces began destroying entire neighborhoods. Saudi snipers fired indiscriminately into buildings and cars killing innocent civilians including babies and children. Moreover, the city was shelled and bombarded by rockets that resulted in a war zone captured in photos appearing every bit like scenes from Syria and Yemen.

In January 2016, Saudi Arabia executed the prominent Shia cleric Sheikh Nimr Baqir al-Nimr, who had called for pro-democracy demonstrations, along with forty-seven other Saudi citizens sentenced by the Specialized Criminal Court on terrorism charges. Are these executions part of the kingdom’s war on Shias or pro-democracy movements?

Joachim Hagopian: I think one can accurately say the Saudi government violence on its own citizens was designed to suppress all dissent within the Kingdom, be it from Shia or Sunni citizens alike, as well as declare war on the Shia population. After all, the vast majority of those executed on that January 2016 day were Sunni. The House of Saud wanted to send a very loud and clear message to anyone and everyone opposing its governmental policies that regardless of their religion, they will be met with the same severe and extreme reactionary aggression to quell any future uprising or rebellion from spreading. Both social and economic conditions inside the oppressive kingdom have in recent years been increasing internal tensions within the Saudi populace. Some analysts have speculated that the growing turmoil and instability percolating inside the country could topple the House of Saud government at any time. Thus, to ward off this growing threat, oppressive regimes like in Riyadh will only be violently clamping down further to crush the least signs of protest and dissent. Last year as a clear-cut indicator of mounting internal instability, an unprecedented shakeup within the Kingdom’s power structure occurred removing scores of princes and ministers from power.

On the other hand, with Shiite Iran becoming a regional power that poses the most serious threat historically to continued Saudi dominance directly challenging its leadership role within the Islamic world, Riyadh launching a genocidal war against its own Shia citizenry amounts to a proxy war against its foremost Shia rival Iran, not unlike its illegal war in Yemen. Similar to the decline of the U.S. Empire refusing to accept a multi-polar world sharing global power with Russia and China, its fellow axis-of-evil “little brothers” Israel and Saudi Arabia are also on the losing downslide of history as all three nations are fast growing more desperate and erratic, endangering the entire world with their quickstepped march to World War III insanity. Knowing that both the kingdom and its allied axis are both losing power, they’ve embarked on a collision course that spells disaster for this planet unless their suicidal and homicidal pathology is somehow arrested and thwarted.

What could you say about the silence of the media and the UN regarding Riyadh’s human rights violations?

Joachim Hagopian: The silence coming from Western mainstream media is the same silence deftly heard in Yemen and Palestine. Clearly the U.S. Empire is supporting its fellow axis-of-evil allies in both Saudi Arabia and Israel’s genocidal wars. And the UN as the ineptly failed steppingstone to one world government that’s long been the New World Order agenda, represented by U.S. Empire and its partners-in-crime, have all committed themselves to paths of self-destructive ruin on the wrong side of history. Their collective policies of evil have been dictated by the Luciferian elite responsible for all wars, the impending collapse of the usury debt based global economic slave system, the willful suppression of all cancer cures and free energy technologies, and the planet’s current pedophilia pandemic and its globalized child sex trafficking network. Because the silence of the media is controlled by this same centralized Luciferian power structure, it remains silent to speaking truth to all these war-on-humanity battlefronts.

Joachim Hagopian is a West Point graduate and former U.S. Army officer. He has written a manuscript based on his unique military experience entitled “Don’t Let The Bastards Getcha Down.” It examines and focuses on U.S. international relations, leadership and national security issues. After the military, Joachim earned a master’s degree in Clinical Psychology and worked as a licensed therapist in the mental health field with abused youth and adolescents for more than a quarter century. In recent years he has focused on his writing, becoming an alternative media journalist. His blog site is at empireexposed.blogspot

‘The struggle set forth by Imam Khomeini is the true Jihad’