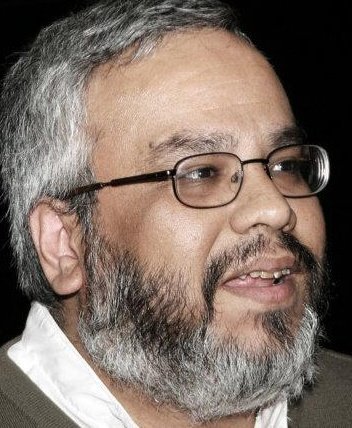 Islam is against wars of occupation and forcible conversion of people to Islam, an Islamic scholar says.
“Muslims and non-Muslims have for generations and centuries lived in peace; the situation of wars and violence comes about when people usurp the rights of others when people oppress the masses; the natural reaction of an oppressed person is to resist the oppression,” Shabbir Hassanally told Shia Followers in an interview.

How does Islam encourage Muslims to establish peace with non-Muslims? What are the conditions of doing that?

Shabbir Hassanally: Firstly, Islam is against wars of occupation and forcible conversion of people to Islam. This is not from the teachings of Islam, Quran or Ahl al-Bayt. This needs to be made very clear. In Islam, peace is paramount, but peace WITH justice, there can be no peace without justice. The reality is that peace without justice is capitulation and humiliation; for it allows the aggressor to get away with their aggression, without being held to account and without the establishment of justice.
Muslims and non-Muslims have for generations and centuries lived in peace; the situation of wars and violence comes about when people usurp the rights of others when people oppress the masses; the natural reaction of an oppressed person is to resist the oppression. We have countless examples in history of this scenario, suffice it to say that the campaign launched by the Prophet Muhammad to take back the stolen property of the Muslims that had been usurped (following their migration from Makkah to Madinah) by the Pagans of Makkah was not a war of aggression. Rather it was a war to prevent and stop the theft of the possessions of the Muslims. Off course I’m speaking of the Battle of Badr that took place in the Month of Ramadhan 2 years after the Hijrah.

The history of the battle of Badr is famous, but it is framed by the orientalists in a manner that gives the impression that Islam and the Prophet Muhammad were aggressors. The reality is the exact opposite. People had their possessions looted because they had chosen to follow Islam and had migrated to Madinah due to the extreme persecution and death threats upon them in Makkah. Behind their backs, the possessions, land, properties, etc. of the Muslims were stolen by the Pagans of Makkah, laden on the back of camels and were being taken to the various corners of the world on trade caravans. The Muslims had every right to fight back.

The Muslims didn’t go to fight the pagans of Makkah in Badr because they were pagans. Rather it was because they had usurped their rights and property and were thieves. Even if the pagans of Makkah had professed to be Muslims, stealing is still stealing, and stealing is an oppression. Resisting oppression is something that is very normal and indeed required, because failing to resist, even just by word if not any other way will allow and bolster and embolden the oppressor to continue with his oppression.

But in the Quran, when permission was given to make this resistance against the pagans of Makkah and their theft, it was done with many conditions as I’ve outlined earlier in this document. War has conditions, and unlike the “modern warfare” of the Zionists and their allies, collateral damage is not an acceptable situation, targeting civilians is unacceptable and not permitted and much more besides.

Within history, there are many examples like this, but that one should suffice to explain the situation.

Within Islam, there is peace with all people – except those who engage in oppression and tyranny against the masses. In Islam, we do not compel anyone to become Muslim, rather as the Quran says very clearly – truth is manifest and clear from falsehood – and people will come to Islam in their own time. Rather, the key to delivering the true Islam of Muhammad to the people is to be a true follower of this Islam, to be an example in society – such that as Prophet Muhammad prior to announcing Islam, was known by the pagans of Makkah as the truthful, the sincere, the trustworthy, the honourable and so on.

As Muslims, and followers of the true Islam of Muhammad, this is what we need to accomplish. This again has been done by the Islamic Resistance in Lebanon, where the words of Sayyed Hassan Nasrallah are trusted by friend and foe. The Zionists know very well that Sayyed Hassan doesn’t lie and doesn’t exaggerate the Truth; if he says something, then it’s valid and accurate – and this is from the Zionists, not from the believer who people might argue is “biased in his favour”!

As I’ve mentioned before also, the conditions for any peace with anyone is that Justice should be in place. If the Zionists, for example, were to adhere to the principles of Justice and hold a fair referendum in Palestine (with the full right of return to those who have been exiled illegally), then there can be peace potentially; but the Zionists are a bad example here, because their motto – or rather that of their “intelligence” services puts the entire idea of trustworthiness and justice into question; and what is this motto? “בתחבולות תעשה לך מלחמה” (Deceit is essential in warfare).

Who do you regard as the true symbols of jihad in today’s world?

Shabbir Hassanally: In today’s day and age, there are multiple symbols of jihad or resistance in the world, from those of history – such as the Prophets of God who came to establish justice upon the Earth, the greats such as Noah, Moses, Jesus, Joseph, John, Zachary, Seth, Job, Jonah, and off course Prophet Muhammad.

One prophet who especially comes to mind when thinking of resistance is Job (Ayyoub), who was tested by God in a difficult manner, and had to face very difficult times; but he persisted, and stayed loyal to the Truth and to Justice.

If we look at more recent history, you have the Prophet Muhammad, and the Imams from his lineage such as Imam Ali, Hasan, Husayn, etc. You look at the Jihaad the struggle of Imam ar-Ridha while in the court of Mamoun al-Abbasi; the Abbasid Caliph, and the way he made his resistance and his Jihaad. Of course you have the stance of Imam Husayn in Kerbala, where even when hugely outnumbered, the pure blood of the seekers of Justice destroyed the Ummayad Caliph Yazid I.

In recent times, there are examples like Shaheed Mutahhari, Shaheed Bahonar, Shaheed Beheshti, examples such as Shaheed Navvab Safavi who was executed while speaking the Truth to a despot.

In current times, you have heroes such as Shaykh Ragheb Harb, Sayyed Abbas al-Mousawi, and of course Hajj Emad Moghnieh.

The names I’ve mentioned are but a tip of the iceberg, there are countless symbols of Jihaad in this age; let’s never forget Allamah Tabatabai, Shaheed Mohammad Baqir al-Hakeem and many many more.

Now, there are some who will suggest that Hajj Emad was a soldier and so his jihad was more physical and war-related as opposed to the greater struggle that I have mentioned; but this is because people don’t know about Hajj Redhwan; had they known about him, they would know – and he has said this clearly – that the more important aspect of the soldier is the spiritual connection to the Truth and the Justice.

To conclude this answer, I want to quote a saying of Imam Khumayni where he said: “Verily the jihaad of Hezbollah in Lebanon, is a proof (hujjah) for the Ulema (learned)”.

What’s your take on the resistance movement’s jihad against takfiri terrorists?

Shabbir Hassanally: As I’ve said earlier; the resistance and positions taken by the Islamic Resistance in Lebanon, Hezbollah against the Zionist inspired Takfiris are exemplary. One important point needs to be understood here; the Takfiri phenomena is something which has no connection to Islam. Takfirism is to Islam, what Zionism is to Judaism. Like Zionism, Takfirism has usurped Islam, taken its teachings out of context and manipulated it into some disgusting and vile.

Sadly, due to the lack of education and sense on the part of many the world over, Takfirism has been promoted as a valid variant of Islam, since on the surface it seems to adhere to the teachings of Ibn Taymiyyah and Ibn Abdul Wahhab, who allegedly both followed a valid school of Islamic thought, the Hanbali School. The reality is very different.

The Hanbali School of Islamic Thought has just been manipulated and usurped by such people and further by the Saudi Family and their Court Clerics (all paid with stolen money from the occupied people of Arabia) as a means to promote their regional influence and work against the shining light of the Islamic Revolution and the Islamic Resistance.

Takfirism found in Zionism a perfect mate who would work with it hand in hand to harm humanity; therefore, there was a need, to stand up to this corruption of Islam and other divine Abrahamic faiths immediately and firmly. That stance could be in Mosul, Iraq or in Aleppo, Syria, or in Sana’a, Yemen, or in Jerusalem, Palestine; that stance could be in London, England, New York, USA, Washington, USA, Paris, France or Madrid, Spain or anywhere on the face of this Earth.

When DAESH, a primary organ of the Zionist/Takfiri Project, invaded Iraq and occupied land up to Mosul, when the people were harmed and under threat; the leader, Imam Khamenei sent Hajj Qasem Suleimani to speak to Iraq, and to help them. Sepah, the Shield of Islam (Sepah Pasdaran, the Islamic Revolution Guard Corp – the word Sepah in Farsi means shield), came to the aid of Iraq and Syria. On the western front, the Islamic Resistance in Lebanon came and stood firm against the Takfiri Zionist project.

My position on this heroic resistance is that this is a true scenario for Jihad and for Love, for the Love of Justice, the Love of Truth, forces the lover to repel and resist against corruption and tyranny; and if the price of that is leaving this temporal realm like Jihad Moghnieh (the son of Hajj Emad), or Hajj Hojeiji or countless others; then this, as we are taught by the nephew of Imam Husayn, Qasim ibn al-Hasan, “is sweeter than honey”.

And from God alone is all ability and He has authority over all things. 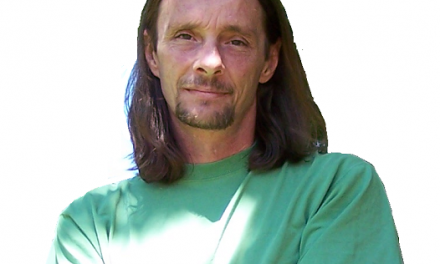 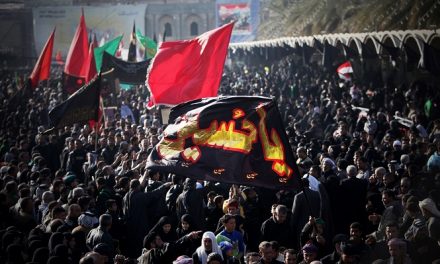 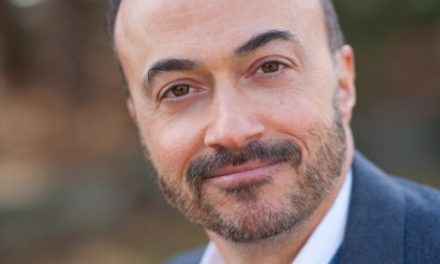